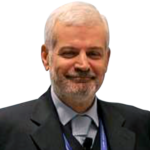 Alfonso Farina received the Laurea degree in electronic engineering from the University of Rome, Rome, Italy, in 1973.
In 1974, he joined SELENIA S.P.A., then Selex ES, where he became the Director of the Analysis of Integrated Systems Unit and, subsequently, the Director of Engineering of the Large Business Systems Division.

In 2012, he was the Senior VP and the Chief Technology Officer (CTO) of the Company, reporting directly to the President. From 2013 to 2014, he was a Senior Advisor to the CTO. He retired in October 2014. From 1979 to 1985, he was also a Professor of Radar Techniques with the University of Naples, Italy. He is currently a Visiting Professor with the Department of Electronic and Electrical Engineering at University College London and with the Centre of Electronic Warfare, Information and Cyber at Cranfield University, a Distinguished Lecturer of the IEEE Aerospace and Electronic Systems Society and a Distinguished Industry Lecturer for the IEEE Signal Processing Society (Jan 2018-Dec 2019).

He was the organiser and Conference General Chairman of the very successful IEEE RadarCon 2008, Rome, Italy, May 2008, and the Executive Conference Chair at the International Conference on Information Fusion, Florence, Italy, July 2006. He has been
honorary chair of IEEE RadarConf September 2020, Florence (www.radarconf20.org).

Honor of Maestro del Lavoro with the decoration of "Stella al Merito del Lavoro" presented to him by the President of Italian Republic in recognition of his outstanding professional career, 2003.
He has been the recipient of technical awards. Fred Nathanson Memorial Radar Award, with the motivation: “For development of radar data processing techniques” (1987). Leader of the team that won the First Prize of the first edition of the Finmeccanica Award for Innovation Technology (2004); International Fellow of the Royal Academy of Engineering, U.K. (2005), presented to him by HRH Prince Philip, the Duke of Edinburgh; IEEE Dennis J. Picard Medal for Radar Technologies and Applications for “Continuous, Innovative, Theoretical, and
Practical Contributions to Radar Systems and Adaptive Signal Processing Techniques” (2010); Oscar Masi Award for the AULOS “green” radar by the Italian Industrial Research Association (AIRI) (2012); IET Achievement Medal for “Outstanding contributions to radar
system design, signal, data and image processing, and data fusion” (2014); IEEE SPS Industrial Leader Award for contributions to radar array processing and industrial leadership (2017); Christian Hülsmeyer Award from the German Institute of Navigation (DGON), with the motivation: “In appreciation of his outstanding contribution to radar research and education” (2019); IEEE AESS Pioneer Award, with the motivation: “For pioneering contributions to the analysis, design, development, and experimentation of digital-based adaptive radar systems”
(2020).

He has been the recipient of Best Paper Awards, such as B. Carlton of IEEE Transactions on Aerospace and Electronic Systems (2001, 2003, 2013), IET - Proceeding on Radar Sonar and Navigation (2009 - 2010), and International Conference on Information Fusion (2004 and 2009). He has been collaborating with several professional journals and conferences (mainly on radar and data fusion) as an Associate Editor, a Reviewer, an organizer of special issues, a Session Chairman, a Plenary Speaker, etc.

Since January 2020 is a member of the Academy of Science of Europe.
Since November 2020, he has been named “Académico Correspondiente de la Real Academia de Ingeniería de España”.

The 26 October 2018 he was interviewed at RAI Storia for the “70° anniversario di Leonardo Company” (“70th anniversary of Leonardo Company”). A 3-minute trailer is available at: https://www.youtube.com/watch?v=xYarcsoiyC8
No entries found for Alfonso Farina