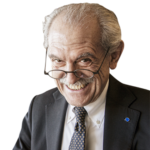 He co-founded Cadence and Synopsys, the two leading EDA companies. He is on the Board of Directors of Cadence, KPIT, Expert Systems, Cy4Gate, Exein, Quantum Motion and Cogisen.

He is a member of the advisory board of Walden International and Xseed, of the Scientific Advisory Board of the Italian Institute of Technology and the Chair of the International Advisory Board for the Milano Innovation District. He is a member of the Advisory Board of the Politecnico di Milano and honorary Professor at Politecnico di Torino. He was the President of the “Comitato Nazionale dei Garanti della Ricerca” and of the Strategy Committee of Fondo Strategico Italiano. He consulted for companies such as Intel, HP, Bell Labs, IBM, Lendlease, Samsung, UTC, Lutron, Camozzi Group, Kawasaki Steel, Fujitsu, Telecom Italia, Pirelli, GM, BMW, Mercedes, Magneti Marelli, ST Microelectronics, and ELT.

He authored 1,120 papers, 19 books, and two patents. He is Fellow of the IEEE and ACM, and a member of the National Academy of Engineering. He earned the IEEE/RSE Maxwell Award “for groundbreaking contributions that have had an exceptional impact on the development of electronics and electrical engineering or related fields”, the Kaufmann Award, the EDAA lifetime Achievement Award, the IEEE/ACM R. Newton Impact Award, the University of California Distinguished Teaching Award, the IEEE TC-CPS Technical Achievement Award, the IEEE Leon Kirchmayer Graduate Teaching Award and the ISPD lifetime achievement award.
No entries found for Alberto L. Sangiovanni-Vincentelli