The key element to achieve superiority in the “battlefield” is the “Information Superiority”.
In this view, the dominance of the Electromagnetic Spectrum represents a fundamental dimension for the acquisition of information and its dominance.
In fact, the elements of interest in the battlefield (deployed assets and threats) are mostly associated with wireless communications and Radar signals.
Therefore, the knowledge of this type of signals, their characterization and their recognition constitutes a strong and reliable way to acquire knowledge of the associated elements, therefore to build a clear and reliable picture of the situation (Picture Compilation), evaluate it (Situation Assessment), and possibly generate counteractions.

The ability to “geo-locate” an electromagnetic source is therefore increasingly essential and produces significant benefits:

A general geo-location system is composed by an array of m sensors.

The system can be ground-based or installed on a moving platform (aircraft, drone, etc.):

In the general case, each sensor receives the combination of n simultaneous signals:

sij (t): the signal emitted by the j-th source and received by the i-th antenna of the system

sEj (t): the signal emitted by the j-th source

dij (t): the distance between the j-th source and the i-th antenna of the system

c: the speed of light.

What is required is an estimation of the coordinates of the electromagnetic source, analysing the characteristics in angle-time-frequency of the received signal and/or its “history” during time.
Any a-priori information about the signal or the “imagined” position of the source can simplify the problem and increase the accuracy of the estimation, such as:

A fundamental parameter is the accuracy of the measurement, which can only be determined after the definition of an appropriate estimation criterion.

It is possible to predict theoretically the best achievable accuracy in an estimation process, using the Cramer-Rao analysis, which provides the minimum obtainable variance in estimating a parameter for a given estimator.
The value obtained is indicated as the Cramer-Rao limit or lower bound (CRLB, Cramer-Rao Lower Bound).
Following this method, the covariance matrix of the estimation error

can be represented in a plane

as an ellipsoid locus of points satisfying the relation:

in case of Gaussian-distributed errors.

The ellipsoid so defined is indicated as Elliptical Error Probable (EEP) whose shape, dimension and area are function of the parameter k, which is strictly related to the probability Pe that the estimated value is inside the EEP. 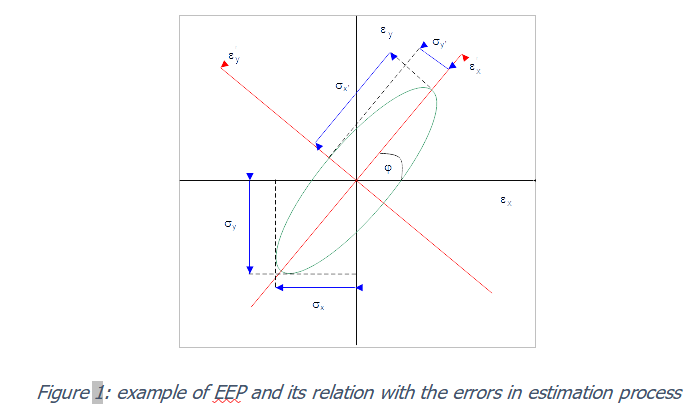 Sometimes, for reasons of simplicity, the accuracy is reported using a single parameter.
The most popular is CEP (Circular Error Probable), referred as the radius of the circle which include the true value of the estimation with a probability of 50%.

In describing each passive location techniques, a theoretical estimation (in closed form) of the measurement accuracy achievable using a Maximum Likelihood estimator will be provided, under the following assumptions:

Although the conditions mentioned above greatly simplify the theoretical analysis, in fact these are in line with most practical applications.

When geolocation is performed from ground-based (stationary) platforms, two major types of techniques are identified:

In all those cases, it is assumed to perform a direct measurement of a certain entity (AOA, TOA, and Doppler) and to estimate the position of the source by suitably processing the measurement and its variations over time, with respect to a point and / or in different points in space at the same instant. Therefore, the whole process is composed by three phases:

The result and, therefore, the accuracy of the estimation and the time needed to obtain it are influenced by the receiving system, by the errors in the measurement of the quantity used for the estimate, by the estimation process itself.
In describing those techniques, we will try to highlight the following merit factors:

For particular types of installations, it is possible to use several techniques simultaneously, both to obtain an improvement in the accuracy of the estimation and to guarantee the presence of information even in conditions of non-visibility in a certain measurement domain (e.g. the angle) with respect to another.