The most simple and classic application of a tones jamming is against FSK modulated target signals, where a single tone jamming is tuned either at the mark or space frequency value.
In this specific condition, both the amplitude and phase of the jamming tone affect the FSK demodulation of the target receiver.
As shown in Figure 1, the jamming tone is present either at the mark or at the space symbol frequency, where in the symbol two different effects are generated respectively.

In the frequency matching condition, that is when the tone frequency equals the current frequency symbol value, the impairment is due to the relative phase between the two tones.
Figure 1a depicts the vector effect over the base band signal where the phase of the jammer tone relative to the target signal can be an important parameter, despite it being completely uncorrelated.
In case of tone frequency un-matching, the symbol frequency falls in the general case of interfering signal.
The target receiver’s front-end and the adopted FSK demodulator affect the effectiveness of the tone jamming.
Whether the receiver adopts a hard limiter, just in-band strong tone interferences affect the FSK demodulation, as stronger in-band tone jamming signal may affect the symbol decision of the desired FSK signal as the noise margin is reduced (Figure 1b).
In the case of selective tone, as shown in Figure 1b, even though the space signal is stronger than the in-band interference, the amplitude of the mark signal, reduced by multipath fading, is less than that of the in-band interference.
Therefore, during mark transmissions, demodulation is severely affected. 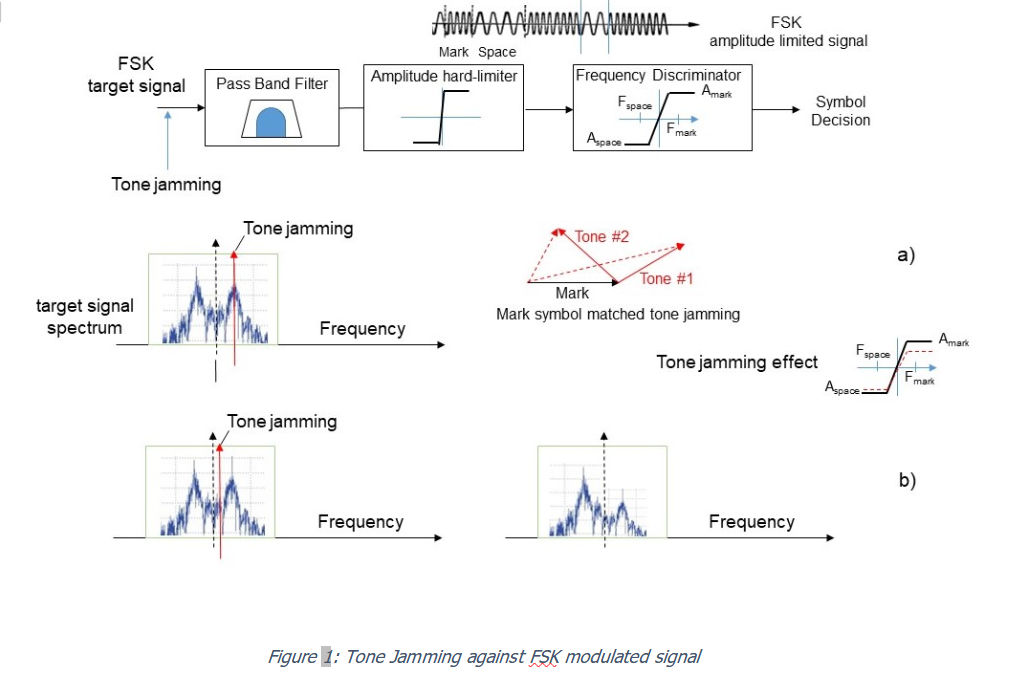 Of course, multi-tones jamming increases the effectiveness up to behave like a Narrow-band noise jamming.
Splitting the available jamming power over multi-tones allows impairing multi-tone radio communications.
In the military communication this technique is adopted in HF data link and UHF old L11, where 15/32-tones waveforms are generated.
Commercial communication and modern military waveforms adopt OFDM (Orthogonal Frequency Division Multiplexing) access scheme allowing for multi users information flows over multi-carriers signals and performing an effective way of transmission over wireless fading channels.
In the multi-tone jamming model, some subcarriers may be affected by a strong interfering signal.

Multi-tones jamming may be effective against FH-M/FSK signals (Frequency Hopping/Minimum Frequency Shift Keying) as the jammer’s receiver detects and analyses the enemy signal to impair. The multi-tones jammer achieves its best performance over a FH/MFSK system when it selects the repeat- multitoned jamming strategy, once it has the capability to observe the transmitted frequencies and their history in order to understand the structure of the target signal.
It is obvious that as the power of the jammer becomes higher, the available number of jamming tones increases and the performance of the interferer becomes better.