The detection, identification, neutralization and (when possible or allowed) destruction of such UAS, used as unconventional threats when flying near key infrastructure or sensitive areas (e.g. government buildings, high-profile event locations, prisons, military compounds), has therefore become a critical capability. So far, traditional countermeasures have demonstrated their weakness in this regard. Unconventional threats require advanced solutions, and many industrial and government initiatives are rising to meet this new threat.
To neutralize such kind of threat and perform a soft kill action, jammer and deception (namely, Electronic Warfare or EW) are today the most feasible approach and many examples of in-service products exist, with several degrees of sophistication.
In the basket of non-destructive techniques, low power laser technologies and low power electromagnetic pulsed sources are emerging, to negate the threat the use of electro-optic sensors or the use of the electromagnetic spectrum.
Exploiting cyber capabilities is an important vector to counter the mini drone threat, though respective solutions are still immature and require superior knowledge, skills, and tools in the cyber domain.

UAS can be classified, as summarized in Table 1, as a function of weight, altitude and payload (source: U.S. Army Roadmap for UAV 2010-2035).
Categories first focus on classes of weight, that are further divided based on the operational altitude.
CLASS I, which is the subject of this discussion, refers to platforms up to 20 kg.

Defending against small drone threats is a complex issue, since it is not only about eliminating the drone to prevent it from completing its mission. Successful defence must ensure the immediate detection, classification and identification of the object prior to neutralizing it in a secure framework for the safety of the people on the scene as well as minimizing collateral damage.
Given the physical and kinematic characteristics of the drone and the typical modes of use, a multiple sensor approach is necessary to improve the detection capability.

Sensors that can be integrated in Counter Drone Air Defence System are:

However, the operational range of acoustic sensors is limited to a few hundred meters. At higher distances, drones are lost in background noise. On the other hand, radars have a blind spot at shorter distances. This means the acoustic sensor, made up of an array of microphones, is the ideal gap filler for radar systems to cover both long and short ranges. Being relatively cheap, acoustic sensors are efficient tools for the continuous surveillance of particularly sensitive areas.

Every sensor technology has pros and cons, touching a variety of factors: operational performance, installation constraints, life-cycle costs, modularity and scalability, military or non-military use, maturity.
Figure 1 shows a qualitative comparison among the eligible sensor technologies.
The conclusion is that there is no “silver bullet” to detect-classify-discriminate-identify the threat and that a plethora of sensors, correctly functionally integrated, is needed to enhance the probability of detection and the correct trigger of the reaction chain.
Human-in-the-loop is also a key factor at least for today policies and tactics, and the complexity of the technologies put in place together with the unpredictability of the threat require a high level of skill.
Detection and identification are essential, but they are only the preliminary steps in solving the problem of removing the rogue drone from the scene and/or its neutralization.
“Hard Kill” or physical destruction options are limited to combat zones or an open field, where the consequences of falling wreckage, ordnance, or other harmful items are generally irrelevant.

In an urban scenario, a different approach aiming at a “Soft Kill” philosophy is preferable. The following described options have currently been proven as feasible and effective.

Effectors that can be integrated in Counter Drone Air Defence System are:

All the above-mentioned solutions can be upgraded to a higher automation level making wide use of on-board AI and advanced machine vision processing making them patrolling a given airspace.
Within the assigned area, they can autonomously detect, intercept and neutralize any unwanted objects.
The new generation hunter drones can operate as standalone units or be integrated inside a higher-level counter drone infrastructure.

From the operational point of view, a counter-drone system should be able to:

Therefore, a counter drone solution (example is given in Figure 2) is not just the sum of sensors and shooters, it is a comprehensive and continuously evolving Multi-Domain Area Protection Capability aimed to DETECT, DISCRIMINATE, IDENTIFY and NEUTRALIZE DRONE threats. 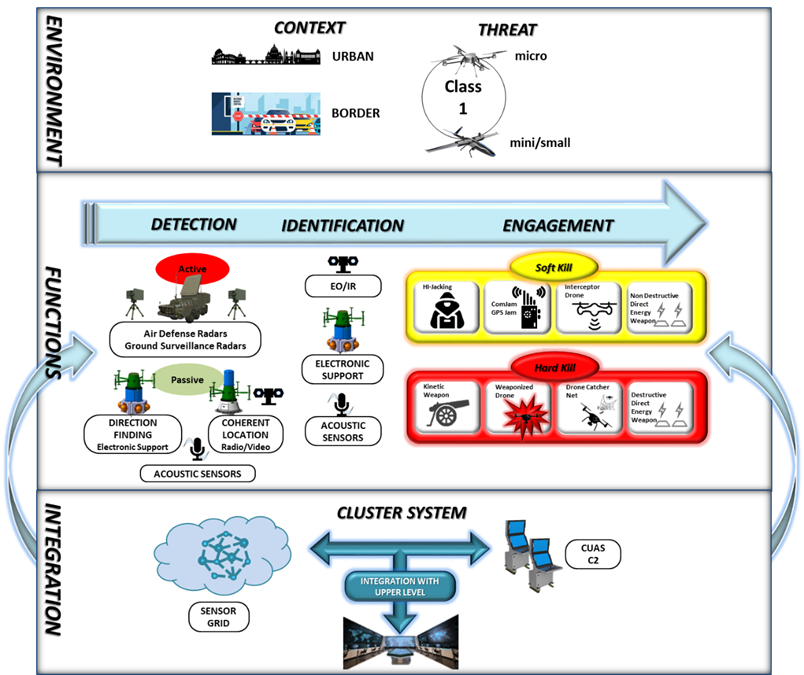 In any case, every Counter-Drone solution, even if modular and scalable according to the operational scenarios and the needs of the final user, will be several times more complex than the threat, requiring a plethora of assets deployed.  Furthermore, the control of these assets will require highly qualified and best-trained operators, whose mission preparation needs to be much more professional and complex compared to the relative simplicity of the threat.

The costs of the defence could therefore be magnitudes higher than the cost of the attack. This is asymmetric warfare. 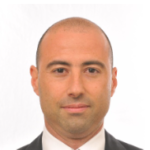