Modern forces are required to operate within an increasingly complex Electromagnetic Environment (EME), which has been recognized as an “operational environment” by NATO (ref. MC 64/11 “NATO recognizes the EME as an operating environment”).

EMSO consists not only of “traditional” EW, but includes several other disciplines, which operate in the EME, such as Information Operation/SIGINT , Spectrum Management and Cyber Electromagnetic Activities (CEMA).

Nowadays, warfare environment calls for immediate reaction since information about the enemy’s position or about a surprise attack becomes available at short notice only and consequently: 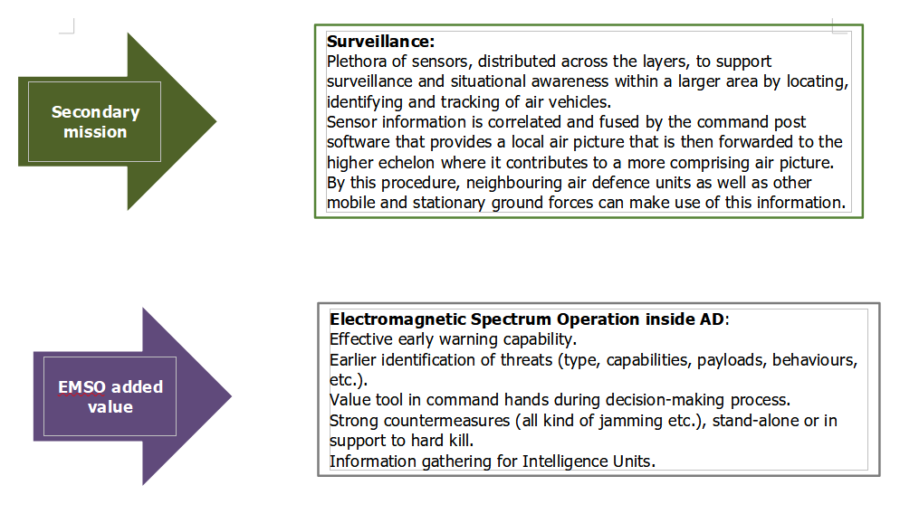 For this reason, ESM/SIGINT capabilities can play an important role in both strategic and tactical surveillance of wide as well as of small critical areas.

Accordingly, ECM can be applied to any target, but especially to the tactical UAS target set, with the purpose of interfering with any RF receiver or jamming transmission. Systems susceptible to jamming actions are the avionics systems (e.g. altimeters), data and command links, SAR and D/GMTI radar, commercial mobile telephony, personal mobile radios (AM/FM), and global positioning systems (GPS).
The goal of ECM is to prevent the successful reception or transmission of data.
This may mean simple narrowband jamming (denying the platform the use of the jammed spectrum) or approaches that are more sophisticated. COMM ECM aims to exploit information contained within the data-link, which is more similar to a cyber-style attack. GPS ECM, consisting of jamming or spoofing, is simple due to the weakness of GPS signals.

However, GPS protection techniques are available to amplify the satellite signal and attenuate in the direction of the Jamming Signal.
Several options could be exploited:

Figure 1: possible deployment of the assets/capabilities in the protected area

The assets in the lower operational level cooperate with each other under the control of the higher level and are equipped with AI and ML (DISTRIBUTED INTELLIGENCE) which act as subsystem C2. Each asset (whatever the level) is composed of a very varied panel of sensors and/or built-in or external effectors (soft kill and hard kill), correlated and associated through dedicated software, driven by an internal C2 software.

The networked and integrated architecture allows operating as a single system (each sensor of a local cell, in addition to managing the area entrusted to it, can act as an early alarm for the sensors of other cells, functioning as a pre-alarm and giving a real decrease in response time).
The Integrated Area protection System of Systems acts as a brick in the territory Air Defence and is perfectly integrated at operational level with other components of the IADS.

The Architecture of the Integrated Area protection Systems must be sufficiently flexible to allow easy addition or removal of different types of sensors and effectors in a plug and play basis with a simple software re-configuration process.

This architecture is based on standard communication protocols although being sufficiently robust in front of possible Cyber-Attacks.
Systems already in operation must be able to easily incorporating and integrating the fast technological evolutions of sensors and effectors to be upgraded and continuously adapted to the evolution of the threats, limiting also the obsolescence issues.