The receiver sends the information to the De-interleaving Process in the form of digital message called PDM (Pulse Descriptor Message).
This message is the EME representation in terms of measures of RF, DOA, PW, plus other information that the receiver is able to measure (e.g. Intra-pulse modulations and eventually its characteristics, measure validity, etc…)

Therefore the PDMs (Pulse Descriptor Messages) that enter the De-interleaver are a confused mix of signals belonging to several emitters that can also present characteristics of agility in time and frequency that can further complicate their classification.

Therefore the task of the De-interleaver is to extract pulse trains of a single emitter starting from samples of digitized radar pulses, PDM’s measured and ordered in previous chains according to a set of rules called “Taxonomy” which collects the various types of notations and therefore describes the way in which the de-interleaving process “knows” the Radars in the EM Environment.

The main purpose of the de-interleaving is to separate signals that are ambiguous in frequency and angle of arrival and to calculate the PRI.

The De-interleaver can be therefore described by an n-dimensional function having as input a series of parameters characterizing the pulses and as output an emitter as unambiguous as possible in the space of possible emitters.

The De-interleaver is composed by firmware and software processes that extract emitters during a number stages, as follows:

Figure 2: De-interleaving in the RESM value chain and its evolution

Clustering being a very fast process needs to be carried out in FW, it carries out the channelling of the PDMS in “chains” (substantially sub-sets of PDMs), the chains are structured with comparators in order to collect PDMs whose parameters (e.g. RF, PW and DOA) fall within pre-defined ranges.

The chains can basically be of three types depending on the criterion used for the association:

Clustering operates a real partition of PDMs: that is, each PDM can “enter” only one chain (i.e. the first whose parameters are adapted to that PDM).

The Clustering output is the “Radar Mode” which represents one of the many behaviours or operating modes of a Radar (an Emitter or Track representative of a Radar can have many Radar Modes).

Software process is divided in several modules, two of them are service modules: 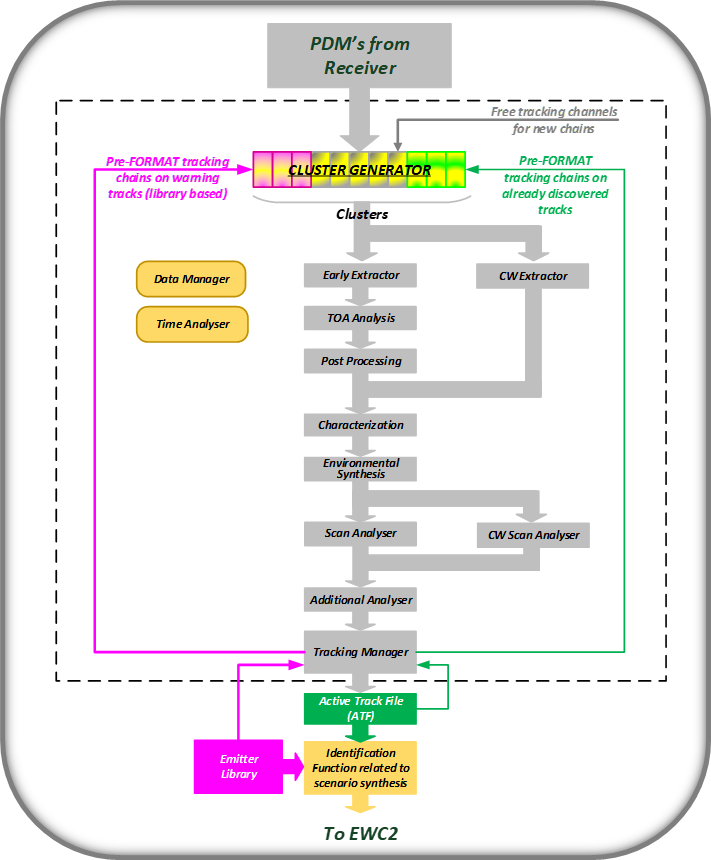 The other are operational modules:

The lost impulses are separated and accumulated in a bin as “waste” which are analysed again at the end of the whole process to find more “exotic” matches, this module works “serially” chain by chain. 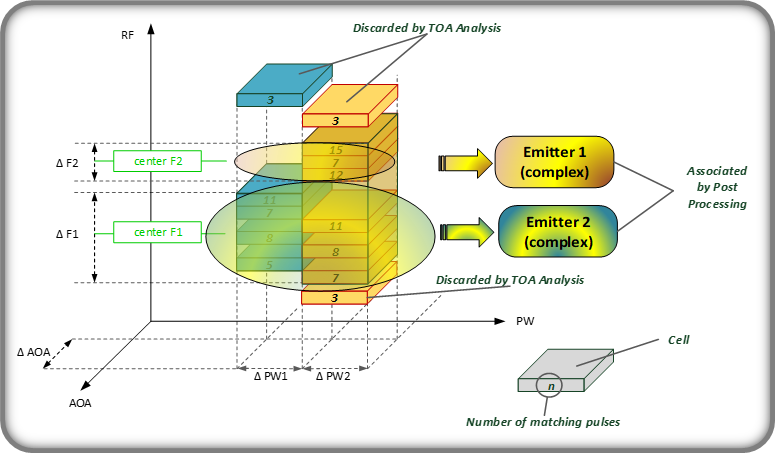 The outcome information is then compared with the emitter library for a match and the resultant data is logged in the Active Track File (ATF).

The active Track File maintains a list of active emitters, evolving for the duration of mission, it is the central database of the ESM and contains information of all parameters measured and peculiar characteristics of each emitter intercepted by the system in a given period of time.

Radar Emitters are modelled in terms of “Radar Mode” (in general, each Radar can have multiple Modes) and a Radar Mode is defined based on its fundamental parameters (RF, PW and PRI) both in terms of values ​​and notations:

• The values ​​are numeric data that express the interval to which a parameter belongs.

• The notations summarize the evolution process of that parameter in the domains of time, frequency and amplitude.

The Taxonomy is defined on the basis of experience in order to be as representative as possible of the “Radar world”, however, it must be clear that a Radar, unlike a generic Radio Communication System (which operates on the basis of a standard that defines the waveforms, protocols, strategies to access the EM medium, etc.), has no necessity to obey any standard.
Each Radar, therefore, while responding to what are the typical “guidelines”, potentially represents a “case in itself” and the Taxonomy that aims to “generalize” the Radar Emitters certainly cannot take into account the particularities and peculiarities of each Radar.

For this reason, the Taxonomy is used as a guideline for the de-interleaving process, while for the more accurate identification process the “Emitter Library” is used, part of the MDP (Mission data Package), which has a much more accurate genesis, being derived from intelligence data and adapted mission by mission.

The Library, as we have already seen previously, has interactions with the de-interleaving process in the following two ways:

Electronic Warfare in general is field in which Artificial Intelligence and Machine Learning can have a wide application.
This is the case of Radar De-interleaving, the process of separating several electromagnetic signals collected in the EM scenario and assessing to what RADARs they belong, that is traditionally performed via imperative algorithms.

However this approach has already reached its limits.
This is due to the fact traditional algorithms take into consideration one domain, like Time, RF, DOA, Pulse Width, at a time which eventually provides poor performances when dealing with actual complex and contested EM environments with several missing pulses.
In fact, the environment is typically very dense and composed of RADAR instances potentially similar to each other in terms of Frequency, PRI and PW.
Additionally, modern multifunctional RADARs are difficult to be framed in any existing taxonomy since they lack of pulse periodicity (or PRI agility), which is typical of older RADARs.

This pressing issue is opening the door to the use of deep learning to electromagnetic signal classification for EW applications.

A novel de-interleaving approach based on neural networks (like Convolutional Neural Network and Deep Learning approaches in general) could instead consider all the aforementioned domain at the same time exactly as an ELINT Operator would do.
A different kind of neural network like Recurrent Neural Network (i.e. Long Short Tem Memory, LSTM) could be trained in order to consider the past sequence of n pulses and assess whether the n+1 is compatible with them or not.
Such instantaneous multi domains and sequence dependent approaches can be combined via model stacking in order to exploit and combine their benefits.

The real issue, is the availability of data needed to train the A.I. based engines whatever the branch of A.I. we want to apply and this imposes methods and procedures at User level for the success of the enterprise.