Electronic Attack (EA) missions are performed to degrade either temporarily or permanently enemy electronic sensors (radars and communication receivers) by the transmission of signals designed for that purpose (JAMMING), or to cause enemy systems to acquire and track invalid targets (DECEPTION).
EA can be applied from air, sea, land, and space by manned or unmanned systems, and can target humans, communications, radar, or other assets generally identified as Spectrum Dependent Systems.
In other words, Electronic Attack aims at the Spectrum Dominance in a combat environment.

Electronic Attack, according to the mission performed can be divided in:

Electronic Attack can be also divided according to the targeted equipment: Communication EA and Radar EA.

Stand-In can be exploited both for radar EA and for Communication EA. 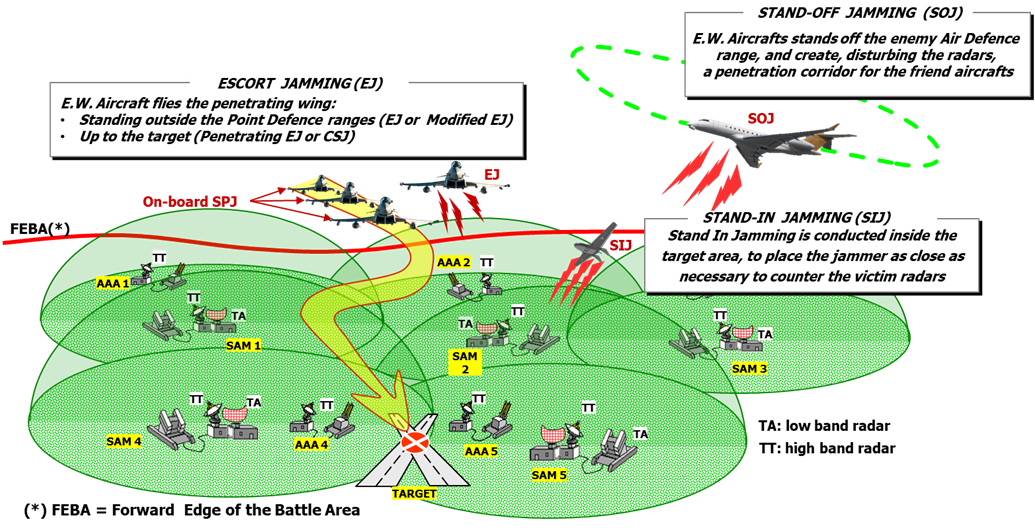 For a number of years, military operations have used electro-magnetic attacks to disrupt enemy radars or to break enemy communications on the battlefield.

Today the access to the EMS and/or to the data and information carried by EMS has become much wider and wireless networks support data exchange among computers in the battlefield creating a computer communication network based on electromagnetic interconnectivity.

This opens a new entry door for Cyber-attack: new communication jammer must have also the capability to carry Cyber payloads to be delivered to the target computers through the EMS and through the wireless network.

Communication Electronic Attack includes the capability to performing Cyber Warfare: Electronic Warfare and Cyber Warfare work in conjunction and thus may be viewed as two sides of the same coin, which is often indicated as Cyber EW or Cyber Electro Magnetic Activity (CEMA).

CEMA Electronic Attack is defined as Offensive Cyber Operation (OCO) that projects power and a wide range of effects into the adversary’s network through the combination of EW and cyberspace activities.

The key focus of CEMA in OCO is on the cyber and EM capabilities of the adversary, on the detailed collection of all the technical aspects of the employed asset, and on the automated countermeasures and respond procedures.